Song: This Old Man
This old man,
He played one, (hold up one finger)
He played knick knack on my thumb.
With a knick knack (slap knees)
paddy wack (clap hands)
give a dog a bone, (hand jive)
This old man came rolling home. (roll hands)
Two … on my shoe // Three … on my knee // Four .. on the floor // Five … on the hive

Book: What Pet to Get? by Emma Dodd

Action Rhyme: Can You?
Can you hop like a rabbit?
Can you jump like a frog?
Can you waddle like a duck?
Can you wag your tail like a dog?
Can you fly like a bird?
Can you swim like a fish?
Can you sit back down and be as still as this?
Source: Perry Public Library Storytime

Song: Song cube (The Wheels on the Bus)

Book: Memoirs of a Hamster by Devin Scillian; illustrated by Tim Bowers 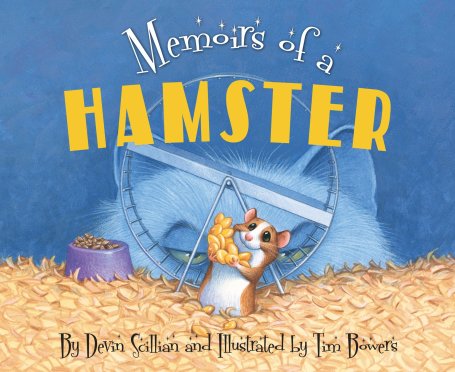 This book is a little long so I shortened it when I could. However, despite its length the kids were engrossed in the story and sat still and listened. Success!

I didn’t have many people with pets in this group and no one had a cat AND a dog. I’ve owned cats and dogs at the same time so this book was very funny to me because I recognize the cat/dog dynamic but I think the kids just thought it was funny.

Song: Snow on the Rooftops (to the tune of Twinkle, Twinkle Little Star)
Snow on the rooftops (make pointed roof shape with arms)
Snow on the trees (hold arms out like tree branches)
Snow on the green grass (wave hands over the ground like you’re touching grass)
And snow on me! (point to self)

Snow on my mittens (hold up hands; wiggle fingers)
Snow on my nose (touch nose)
Snow on my head (touch head)
And snow on my toes (touch toes)