God bless the people that make up these nonsense holidays. What a great theme for a party!

I started off with a short story time: 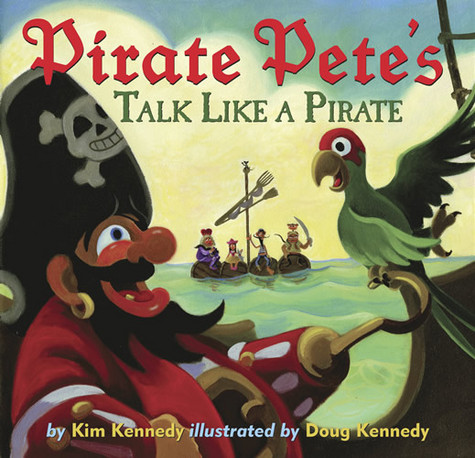 Pirate Pete interviews a crew of scalawags only to find out his parrot has the best pirate talk!

My coworker and I have determined that my pirate accent is more Irish than pirate. I figure I’m just channeling my inner Grace O’Malley!

Action Rhyme: The One-Eyed Pirate
The one-eyed pirate, (cover one eye)
He’s fierce and he’s tough. (clench fist and scowl)
He digs for buried treasure, (digging motion)
But it’s never enough. (shake head)
He lives on a ship (hold up hand flat, thumb out)
Way out on the sea. (rock hand in curvy motion, other hand under it)
His parrot is his only friend, (perch hand on shoulder)
Except, of course, for me. (point to self)
Source: Sunflower Storytime

I asked the kids if anyone had a guess. The first kid that I called on knew the answer! I should have said if they knew the answer to keep their hands down because we were going to start with guesses but alas. Lesson learned. I think it’s still a fun fact!

(Answer: Pirates had to work (and I’m guessing fight/defend but I left that part out) quickly between decks and wearing a patch helped keep one eye adjusted to the dark at all times.) 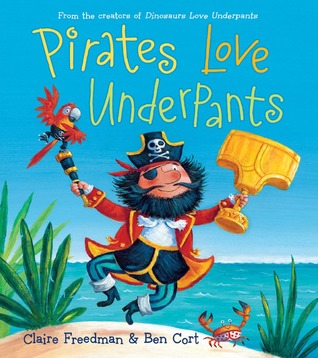 After story time, we had three activities for the kids: a treasure hunt, a ring toss, and a craft. I asked the kids to please only take one treasure at each stop on the hunt so we had enough for everyone and I think they all complied. We certainly had enough prizes to go around.

The treasure hunt consisted of four clues with treasures found at each one. 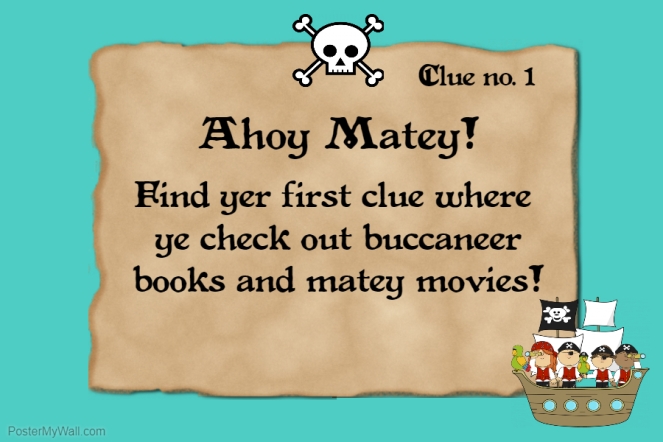 This first clue led them to the checkout desk where I had a bowl of candy. 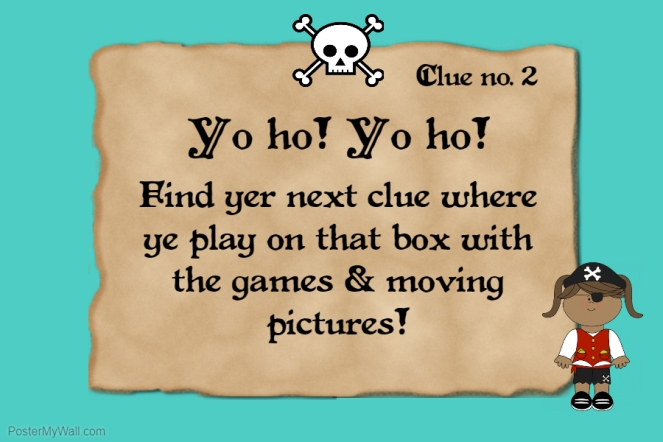 This led them to the computers where I had out a bowl of stickers.

I forgot to take a picture of the “plank” but I laid out a blue tablecloth from the dollar store and snaked a crooked line of duct tape over it for them to reach the next clue. I also taped down little bath toys (a turtle, a fish, and a whale) in the “water.” 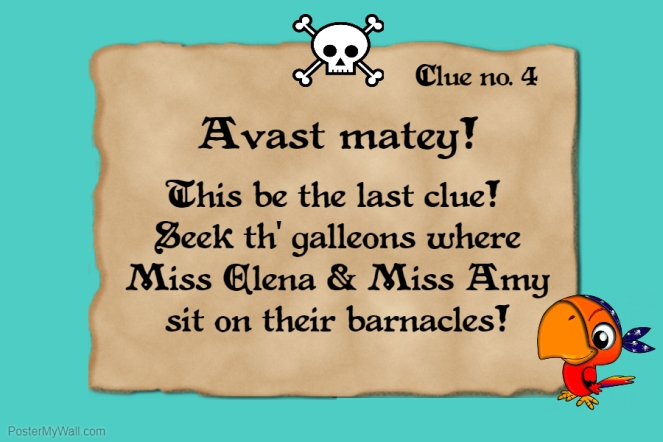 This last clue led them from the block area to our desk in the children’s area. 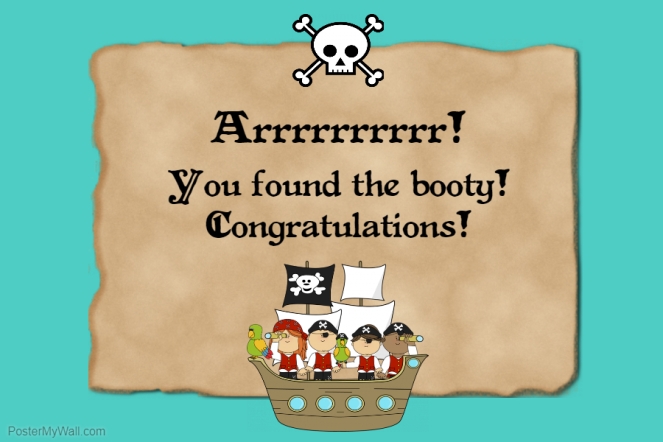 The “booty” was a temporary tattoo. Every pirate has to have a tattoo, right? We had them take the tattoos home and put them on there since putting them on in the children’s area would be too messy. And you have to hold them on for 60 seconds! Definitely a better activity for home.

Our craft was a parrot: 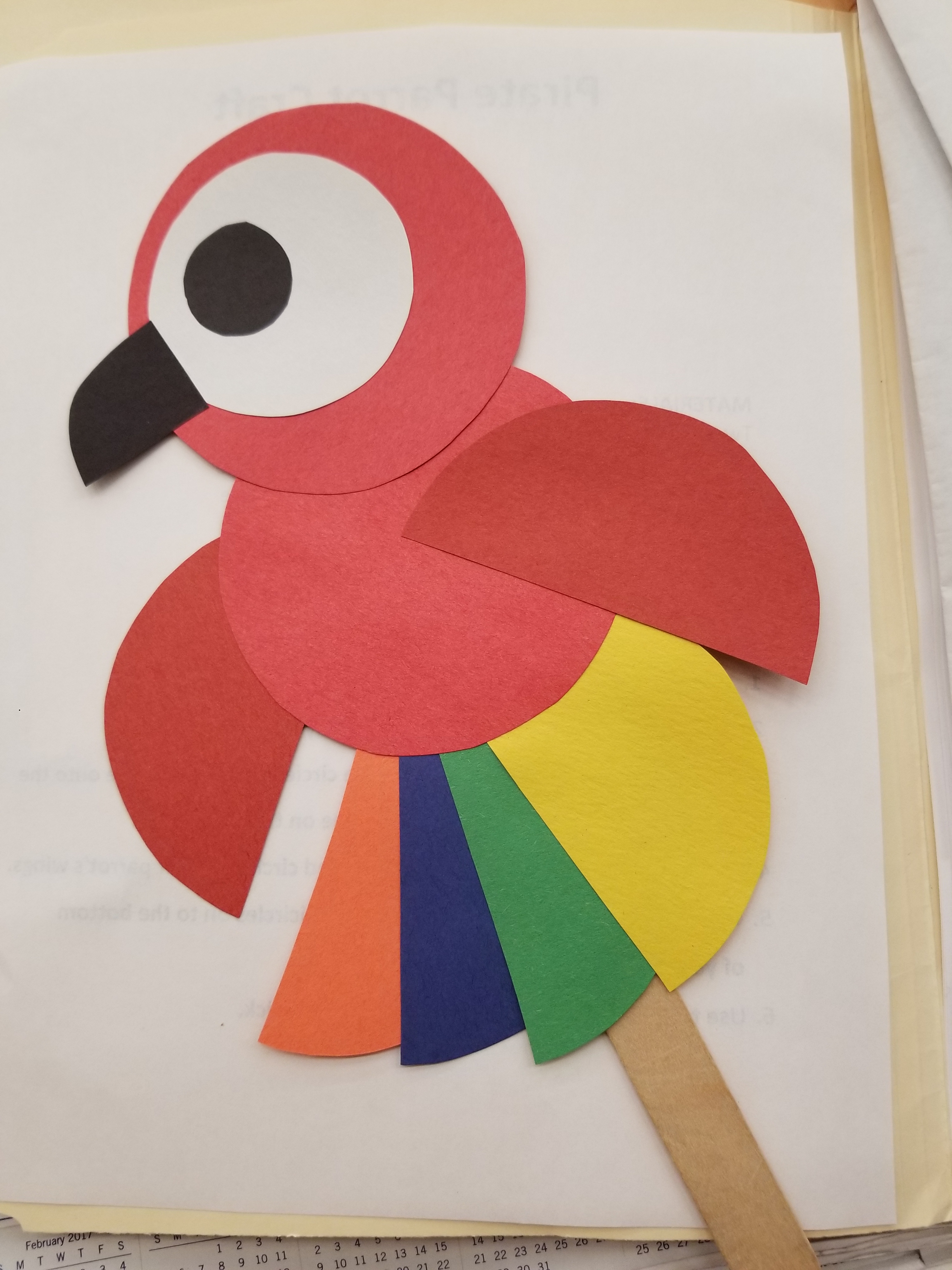 Cute, right? I got the idea here. I loved that it was on a craft stick so they could perch their parrot on their shoulders.

And finally our hook game: 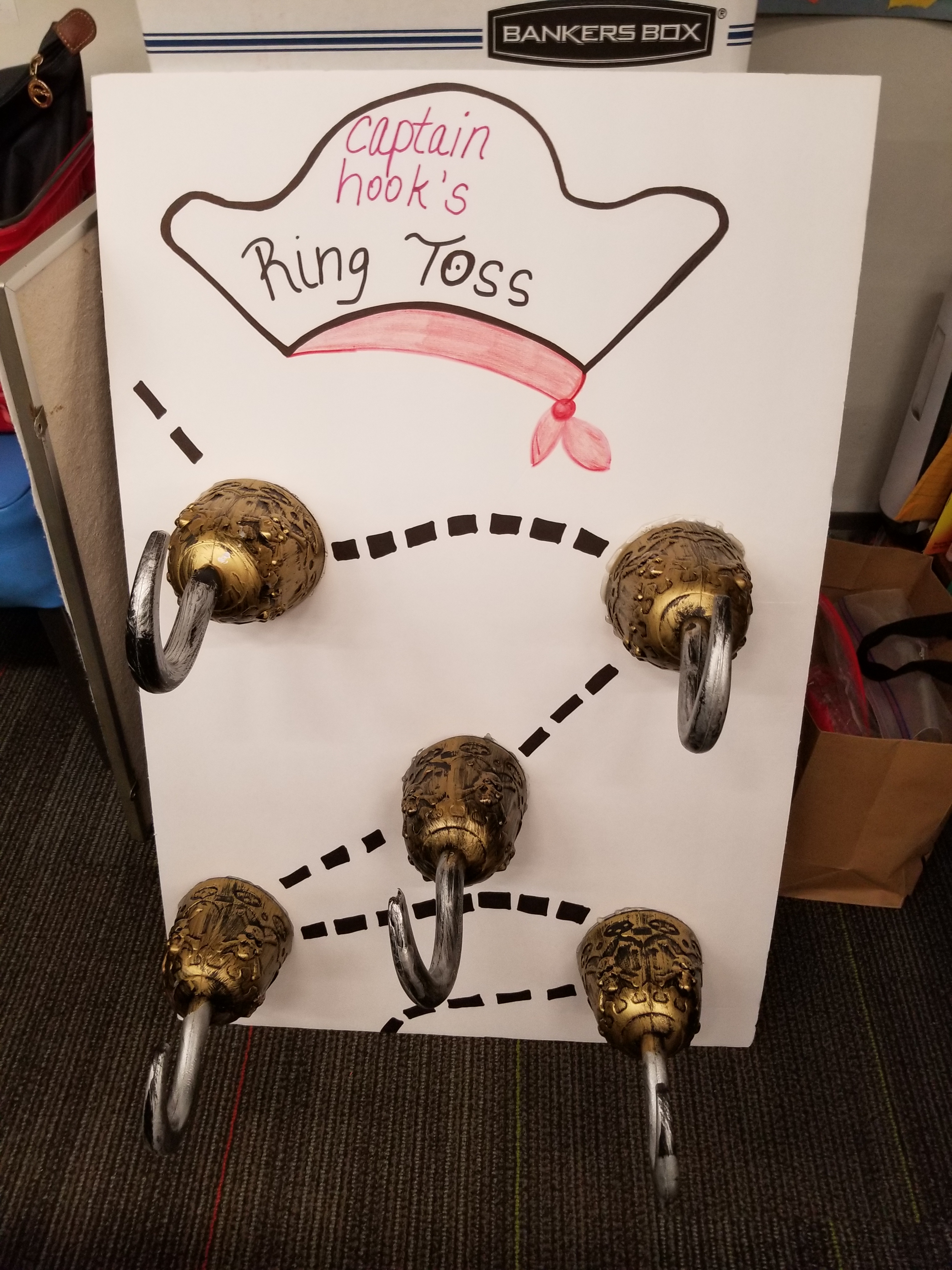 Amazing! We got so many compliments on the board. I got the idea here. We had two sets of rings and the kids came back again and again to take a turn. Also hot glue = cement because those hooks were tugged, nudged, agitated and bumped and they held firm! I got the poster board and the hooks at the dollar store. Good things this holiday is close to Halloween!

I think the kids had a great time and we even had some show up in costume! We heard a lot of parent compliments which is always lovely.

So thar ye have it!